Like Adam said to Eve; “Stand back, I’m not sure how big this thing’s gonna get.”

Over the last few weeks I’ve been thinking/ranting/blogging/tweeting about unstructured content, social business, systems of record (SOR), Systems of Engagement (SOE), mobile stuff, and the whole thing about going paperless. What I’ve concluded is that it’s all seemingly one big inextricable mess. It really isn’t, though. I think the key pieces are Systems of Record/Engagement (SOR/E) and interoperability (CMIS, Integration for the smarty-pantses reading this).

Regardless of what some want / think, we’re not going to ever be 100% paperless even though it makes lots of business sense. The uproar over the mobile thing is a temporary distraction caused by all the new devices we have at our disposal to create “stuff” and interact with it.

SOR/E’s and interoperability are where it’s at. However, you first need to understand that a system of anything is not a tool. D’uh. A system is the combination of the processes, people, information, and tools that are used to get sh*t done!

A system that includes laptops, tablets, smart phones, and mainframes is every bit as valid as a system that includes pens, paper, and abacuses (abaci?). The key is to combine the various system components in a way that achieves an intended outcome. Unintended outcomes of a positive nature (serendipity, opportunity) are welcome. Unintended outcomes of a malevolent nature (issues, but you better have a risk management plan and understand the difference between issues and risks) are not.

Mobile devices (Ha! My brain is mobile and goes where I go. Does yours?) and mobile content are today’s red-headed step-children. But that’s only because they’re relatively new concepts (aside from cell phones and txt msgs) and we haven’t really figured out how to manage the content they produce, consume, and interact with (Actually, that’s crap; devices don’t do content, people do).

In his AIIM white paper, Geoffrey Moore gets one thing kind of right: “Clearly, systems of engagement need to operate on top of and in touch with our existing core systems of record.” I’d state it a bit differently; SOE’s extend the possibilities and reach of SOR’s. SOE’s and SOR’s need to be merged in order to achieve true Enterprise value.” (That’s why I came up with SOR/E’s).

I think he (Geoffrey Moore) also gets one thing dangerously wrong, though I don’t actually think it’s intentional. It may just be me, but I get the prickly feeling that when he refers to system he actually means tool (e.g.: PeopleSoft, Siebel, ACT!).

What if we were to take a different look at things? What if, instead of systems of records and/or engagement (you’ll notice the intentional lack of capitalization) we looked at them as layers; as in an n-tiered architecture? Is the engagement layer really anything more than what the user sees/uses? Isn’t the record layer merely the database / content repository? Are devices really anything more than elements of the presentation (think User Interface) layer (a.k.a. the Engagement layer)? 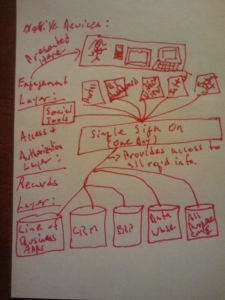 By the way, I am not using the word “records” in a Records Management (ARMA, CRM) way here. Records really ought to be thought of as transactions.

Why did I use the Aerosmith version instead of the Beatles original? Watch it and figure it out.

Posted on September 27, 2011 by christianpwalker

← I’m Goin’ Back
Cloudy with a Chance of Success →

9 Comments on “Come Together”

This site uses Akismet to reduce spam. Learn how your comment data is processed.